"Human history becomes more and more a race between education and catastrophe."
-H.G.Wells

Here are just a few of the touching life stories of our scholarship students... 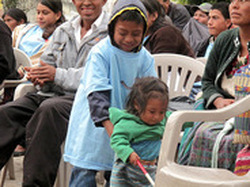 Our youngest student is a special case.  His name is Feliciano and he is only seven years old.  He was blinded by in a terrible accident in February 2010.  Unfortunately, Feliciano was hit by some bullet scraps in his optic nerve and lost his site.  Our program is helping buy him the equipment he needs to learn braile and to travel to monthly classes in Quetzaltenango where there are teachers trained in braile. 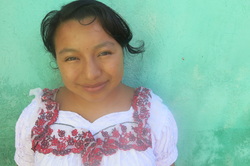 Simoeona Pu Castro
Meet Simoeona.  She is the first member of her family to graduate high school.  Unlike most girls living in rural Guatemala, Simoeona was lucky enough to have had the opportunity to graduate the sixth grade.  She had big dreams of becoming a teacher, but because her family’s economical resources were scarce, she was not expected to continue studying.

Determined to find a way, Simoeona applied to receive a scholarship from Becca’s Especiales Uspantán.  In 2007 she was selected and her long journey began.

Studying at the Middle and High school level in Guatemala is very expensive.  Not only is a student expected to pay tuition, but they must pay for a uniform, gym clothes, internet time and supplies.  The scholarship Simoeona received was a huge help, but it wasn’t enough.  She and her family had to make huge sacrifices to make ends meet.   At this point in time, Simoeona’s dad was diagnosed with diabetes and was no longer working.  Her older brother was struggling with addiction and was not a constant presence.  Without any other help, Simoeona and her mom had no choice but to start working.  Before school Simoeona worked cleaning an older woman’s house.  It was challenging to manage her responsibilities at work, school and at home, but somehow Simoeona made it work.  But even that wasn’t enough.  Her family’s financial situation forced them to make the difficult decision to sell a piece of inherited property. Selling the land was a huge loss for the family, but Simoeona’s mom became her biggest cheerleader; constantly encouraging her and reminding her that getting an education was the surest way Simoeona could create a future for herself and her family.

Simoeona graduated with her teaching certificate and shortly after received a contract to start teaching at a local elementary school.  She became the breadwinner for her family of six.  Her mom stopped working and Simoeona is making sure her younger siblings have the same opportunities to continue their studies.  Becca’s Especials Uspantán has expanded their program and Simoeona is one of the first students to receive a scholarship at the University level.  To this day she is still studying and has an even bigger dream of being the first member of her family to graduate with a University degree. 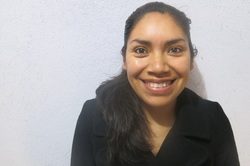 Esperanza was two years away from graduating with her preschool teaching certificate.  She was making ends meet by working at a bakery during the weekends and on her school breaks.  The work was tiring, but she knew it would pay off.  Unfortunately, tragedy struck her family when her father got sick and in 2009, all of her family’s savings was used to pay for an emergency procedure that ultimately saved her father’s life.  With her family’s savings diminished and 10 mouths to feed, her dream of graduating seemed impossible.

While listening to the radio, Esperanza heard an advertisement for Becas Especiales Uspantán and decided to apply for a scholarship.  In 2010, she was admitted into the program.  When she and her mom saw her name posted as a new scholarship recipient, she remembers crying for joy in the middle of the street.  She felt as if a weight was lifted off her shoulders and the sacrifices she made to get to that point would eventually pay off.

In 2011, Esperanza was the first member of her family to graduated high school. She feels an enormous amount of gratitude to the donors of Becas Especiales Uspantán; because of their generosity, she was able to complete her studies.  With a feeling of needing to pay someone back, Esperanza joined the volunteer committee and now donates her time to the program.

Becas Especiales Uspantán has expanded their program and Esperanza is one of the first to receive a scholarship at the University level.  In 2015, Esperanza started studying higher education at Guatemala’s only accredited, public University.  To be admitted into this University, students must take an entrance exam and score an average of 71 points.  The exam is challenging and many students do not pass, but Esperanza scored a 91.  She is fortunate enough to have tuition costs that are two thirds less than her colleagues studying at private universities. Her scholarship is able to cover almost all of her expenses and for the first time she no longer has to worry about how to finance her education and is able to focus on just studying.